It’s Tuesday, 7/30/2012 and there is a small controversy at the Olympics. The American media (see below Google news search result, plus the TV for the past few hours) is reporting that America is complaining that a Chinese women has beat American men in swimming performance. I took a snap of results available to me right now and I cannot see why 4:05.18 gold medal performance in 400m IM by Ryan Lochte is beat by Chinese women Ye Shiwen’s 4:28.43. Her’s is a full 13 seconds slower!! WTF? 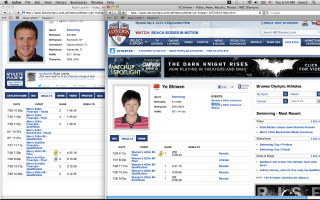 The world is about to end… Look at this massive disaster in India where there is more people without electricity than US and Canada population combined… and nearly all of Greenland’s ice cap has melted, but all of that cannot compare to the loss of American individual propaganda free mindset. 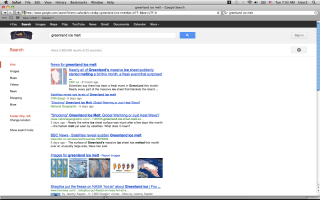 THE CHINESE have had for the past three decades the observation that China is 阴盛阳衰: the Yin prospering and the Yang in decline, or “Weak” according to google translation today. The female Chinese athletes have in the past performed better in the international competitions than the Chinese men, things like soccer, volley ball, tennis… Chinese Men can only compete in Table Tennis and similar small-balled games.
But today! All of American media have taken this same view and said that Chinese women is faster than American man even when the results are clearly not so. The Chinese women DID NOT JUST BEAT AMERICAN MAN IN SWIMMING. OH! MY!! FUCKING!!! GOD!!!! this is so fucking offensive to me as a Man, an American, and as a Chinese man!! And as an Internet professional that our industry lets this kind of crap seep into it’s mainstream. 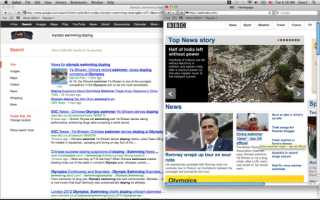 The British authorities on the matter have declared that she won that women’s competition dope-free. Yet American media has refused to report on this. Even Google’s automatic algorithm is refusing to pick up the BBC headline on the matter. I mean, I even feel like suggesting that the Brits are just trying to kiss the Chinese’s ass in case it needs the goodwill economically in the near future. I mean, really? Did North Korea’s starving athletes just really won Gold in Judo? REALLY????
But a corrupt Olympic games, athletes and officials is not really a concern to me, as I am not an athlete and I am not uplifted by the Olympic spirit:

and I didn’t get up at 5 this morning to watch Olympics, and I most certainly did not get up early to watch American TV and least of all to read news on the Internet.
This is the end… mark my words…, the loss of Chinese moral, American media integrity, universal symbols of progress and betterment of men.

Okay, I recently found out that the Chinese (PRC) government couldn’t stop buying American debt (That is it lends money to the US government which gives it a little bit of interest regularly until sometime in the future when it gives the money back)

There are some attempts, by the Chinese to spend money in the US. Some were blocked blatantly by the US government such as 3Com and UNOCAL, while in other cases, it seemed almost certainly win-win for both sides due to Chinese expertise, manufacturing resources and unique perspective but ultimately failed: Yahoo, Maytag, etc. All this protectionism may or may not be beneficial to the American people. Here for instance is another very very specific case of preventing China from spending all this debt America owes it by way of the “country with special concern” designation which prevents lobbyist from being paid by the PRC. article. Btw, I’ve heard of this from a second radio source as well, but it doesn’t appear to be listed on congressman Wolf’s website.

But let’s for the moment assume that China has too much US $$, and that most avenues of investment: equity in companies, real estate, lobbying, etc. have been ruled out as certain losers. What else can it do with it’s money

Well, let’s see… The one thing that we see the most in America, aside from Chinese restaurants and those evil cult protesters are poor Chinese students. They come to the US having beat everyone else in their own country in their respective arts and sciences or skills, and they often end up delivering food for those aforementioned restaurants or joining evil cults for residency and working rights in the United States. Why doesn’t the Chinese government establish a scholarship for any Chinese student being normally accepted into an American institution so that they can pursue their dreams of excellence in their arts and crafts? Would that not be the most effective investment?? And let me assert that the Chinese government have enough money in the bank to pay for a decent education for all of its students accepted in the to schools in the US. This, btw, is entirely legal in America, even if the funds are managed and disbursed in an American entity.

Oh, WTF, while we are at it, why don’t the PRC. government endow a general scholarship (name it the People’s Republic of China Scholarship for Excellence) that is given to the best candidate of any nationality and race. Imagine some twenty years later, and the president of France, or prime minister of India, or some Nobel laureate proudly thanks American university for an education and China for it’s awesome scholarship. Wouldn’t that be quite an accomplishment ?!!

The money can be spent on establish libraries. They can start a Museum collecting arts of Chinese origin but that have been admired and possessed by non-Chinese. These art are true treasures that have possessed not only their originators but also many other peoples of other race and culture. Wouldn’t that be an awesome museum??!!

Why don’t the Chinese people take all that debt and rent a county; and on that county why don’t they build a university. Build the Chinese University of America. This act not only revitalizes a whole American town, or perhaps a whole state, but also produces jobs, educates new minds, and most of all creates the most perfect nexus of the two cultures and the enlighten minds of the two people. This not only creates jobs in America, it would not only be building American infrastructure, but would also be creating a new believe, a new trust, a new friendship–a new hope for the two people.

Why don’t they spend their money that way?

Back to discussion of the nature of things. Not so recently have I become interested in clandestine activities.


So, what are all these clandestine activities and what difference does it make? Let us dissect the above paragraph into its constituencies:


Monitoring: secret collection of information: boss hires someone to read my personal email. To me, I am okay with people being aware of my personal activities. As long as it is does not materially detrimental to my quality of life. I think corporation law protecting secrecy is the minimal level of protection we have.


For example: mail service provider instrumenting a password and my using a password on my email account demonstrates both intent and effort in hiding my personal emails. Please do not read them! It should be protected just as much as a stocker looking through my blinds which also shows desire and effort towards hiding something.


Reaction: acting on the information gathered under fake reason: boss plans to have an important meeting on the day I scheduled an interview at another company before I ask for that day off for a dentist appointment. Information asymmetry here causes employee to be at an disadvantage. Setting up a DUI check point to block bank robber’s escape route.


Masquerading: acting under the identity of an actual person or entity: eg coworker changes code in my work directory with out asking me. Stealing and defaming my identity. I feel this should be against rule of law and rule of companies. This can effectively kills a person’s identity and his reputation. Doing this is like putting poison in his drink just before he swallows it. This should not be allowed.


Subjects of organized clandestine activities are of two types, some are effectively forced to participate (you cannot buy a house unless you share your information with all our bank networks…), British surveillance system of cameras. Others participate amicably because they do not care or participate in the clandestine activities. And lastly, there are those that accept that they are subjects of clandestine activities without participating in it. I cannot imagine who wants that, but perhaps I can be persuaded that this is indeed an acceptable, and indeed more optimal, society like I accept the police been given the ability to legally (but completely publicly) use force and sometimes deadly force.


There are several issues that needs to be thought through.


It is nearing July 4th this 12th year into our new millennium, I am reading a blog entry of my own from 2006ish talking about this exact issue with exactly same complaints that my email is being read and my code is being messed with.


I wish I could come to terms with these thoughts! They have consumed far too much of my time…