I once asked this silly question on an interview:

Not knowing the answer for many years until recently when I sat down and worked it out, in fact in a more general sense, for non-averages as well, let a,b,c,d refer to any real number with d>=b>=0.

equality holds, and inequality inverts, in both simultaneously.

okay okay, all my friends laughing at me, I know this is silly little math exercise you did when you were in a diaper… whatever!!

The impact of this is, if one is to change from one average to another average half way through some testing period, while controlling the denominator of these inequalities, one would technically not be lying when one says the average has gone up. (not stating that the definition of average has changed)

I had a frank conversation with my father and asked him to read Round II. He felt my explanations were unclear. Instead, he drew the following picture to illustrate from my conditionalization of the ethical imperatives. It stems from his ever present grammar school math basics which says that in a set theoretic axiomatic logic system the statement

if P then Q has the following Venn Diagram: 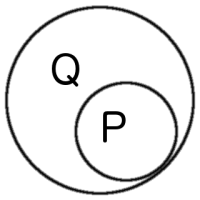 Because Q is true exceeds the situations when P is true, but not vice versa, therefore the containment relationship. After some quick calculation, due to the inversion and making sure the relationship still matches, the golden and silver rule when put into the same “action space” produces the following Venn Diagram: 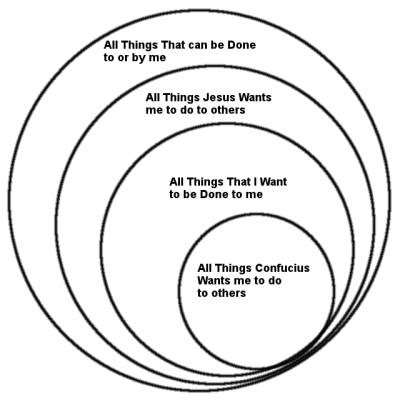 This is now indeed very clear. By visualizing the action space over which both ethical imperatives
reside—those things within my ability to do to other and to be done onto–suddenly we find that these sets of actions: things I can do, things jesus wants me to do, things Confucius wants me to do, and things I want to do, have a superset relationship. The large sets are always proper super set of smaller sets unless I want done to me include all possible things or nothing.

It’s kind of surprising that Confucius silver rule recommends doing fewer things than Jesus’s golden rule–But then again, it may make sense, Confucius speaks much of humbleness, about learning from teachers, he puts greater value on meta-knowledge about one’s own knowledge than the knowledge themselves. Perhaps this conservative valuation of self prevents him from doing as much.

Jesus on the other hand, son of god, savior of the world asks follower to do more in pursuit of heaven. Let’s celebrate his birth…