It occurs to me to write these down on a special occasion… Initially I was considering an optimization problem in a situation where localized optimization is essentially playing a zero sum game with an opponent who is much more powerful.

There are people who are trying to cure cancer and save lives. And there are people trying to trade stocks, win political campaigns, or engage in armed conflict (not that these are the same things) Their continued admonishments against AI are the people who fear the latter. I would imagine there may be very few who would oppose the prior.

That! That is the underlying restriction to the technology: what it can do for prior cause is practically restricted by what it does for the latter. The same applies to all tehnolgies of course. We’ve had internet, social media, a typical Californian would probably take a few minutes to recognize therebeing anything exceeding unusual about the potential downside of yet another meme…

Also, consider aliens, of the interstellar variety, one should always be mindful of our real  competition. There is likely a far greater intelligence out there. Let us not doubt, and let us certainly not delay the development of our own Big Intelligence as matter in due course of our kind’s progress.

The title makes no reference to marriage, per say. Bear with me here for a sec…

A certain strange set of circumstances inspires this thought. Some time ago, some entrepreneurial friends recommends a series of books to me, How to Win Friends and Influence people and Rich Dad, Poor Dad. Saying that these are must read for a young person planning to have a good life.

Okay, okay, please stay calm when I say this, and hopefully you find it funny and non-offensive, as I don’t want my tires punctured again by a nail gun.

Has anybody thought about the psychology of Rich Dad and Poor Dad? I mean com’on, isn’t it obvious that the Japanese author wrote this subconsciously thinking of two real entities?

well? do you see it? The Japanese American author, what did he think while he wrote this? What is the driving thought?

Okay, okay, here it is. America is the Rich dad to Japan and China is the Poor dad.

oh fuck, I can hear all four tires exploding on my car…

okay, yes, yes, I am of Chinese lineage, it’s probably not PC for me to think like this, but if I were Japanese, or had Japanese wife, or if I was dating a Japanese women, it would make it all better, right?. ugh, I promise, when I am rich enough I will adopt a Japanese child, to try to make up for this trespass.

ehem, okay, so I am Chinese ethnically. And I am taught and think that Japan’s language, religion, gene pool, etc, that they in noticeable part come from China some time long long ago. I hope most reasonable people with a bit of rational unbiased inquiry will not object to my thinking this: that China can be considered a dad.

Here is the reasoning: I see two very large Japanese companies, Toyota, Honda,Mazda, Nissan, dominates the US automobile industry by selling to US consumers more than 50% of cars that they buy. So, that number, fifty-some percent, is more than US and European makers’ sales added up together. Certainly I will not be the first to say that “Japanese cars last longer than American cars” is common wisdom among value car shoppers.

Now, I’d like to consider myself a hard-working American. I am American, born in China but naturalized. I feel that my upbringing, growing up in the China of 1980s, and America of 1990’s that I deeply believe in the values that America was built upon. I feel that it is right that I should support this country by working hard, contributing to its production. I recently begun to drive to work everyday and have begun to appreciate the importance of a reliable car when work demands that I get there everyday.

BUT, would you not agree that you’d rather be driving an American car to work than a Japanese car? As a person working and producing in America, would you not feel happier if you heard somebody say: “American cars are Better than Japanese cars” ? More reliable, better fuel mileage, higher safety standards. Would that not bring a grin to your face like it would to mine? I will not belabor this point, but I fear that many Americans have not had a chance to stop and think this thought… no no, feel that thought:

Do not let the media brain wash you into thinking that Japanese cars is always better than American cars, or that it is necessary for another reason. You, American, you can dance, you can sing, you can build a better car than the Japanese.

Why is this so important? Because I feel that sometimes, people here do not get the freedom of mind to think these thoughts. It is not racist to want to build a better American car. It is not politically incorrect. In fact, it really should be less politically incorrect than for the mass media to try to steal the shirts off of those poor Chinese children’s back as they try to make wage to feed themselves and perhaps their family.

Let me repeat! This is not racist! This is national competition. When an honest working American hands out the cash that he honestly made to a Toyota dealer for a car, and I don’t care of the sleazy sales guy is American and his boss is American and his boss is American and the whole company falls under an American registered corporation. The owner of that company (stock owners, board, etc.) are Japanese people. Check on Google or Yahoo or Bing finance, the board of these American companies are completely occupied by people with Japanese names. Yes, some of them may be American citizens, but they all have Japanese names, they are all Japanese people. I don’t need to perform a statistical test to say that that’s not a representative sample of American business man. The companies are completely controlled by Japan.

When you hand over your hard-earned greenbacks to Toyota or Honda, or Nissan or Mazda for a “higher quality car” you are putting that money in the hands of a Japanese person. He is not an American Citizen, he is not concerned about the perpetuation and propagation of the American way. He is a Japanese person who has his own national and racial interests and agendas that differ, perhaps greatly, from those of American interest and values. When you hand your money to him, he has free will to use that money in ways that do not align with American values.

God!! Japan couldn’t send a single radio-activity resistant robot into their power plant to fix the leaks and had to wait for American robots to check out the power plant? I do not believe this, and you shouldn’t either. For all we know, (and we do know at least Honda is doing significant research in non-automotive robotics) that the robot that kills you in World War III is being designed right now! Using your hard-earned money! right now! in Japan! Right at this moment!

This really needn’t be said, but for some reason I feel this needed to be pointed out: when you buy a Japanese car, you implicitly support Japanese value system and if their values are racist or imperialistic, you have no say over if he can spend money-making weapons or take over the world. You have no say in their attempt to sabotage a great American company like Boeing with their defective batteries. (And making it look like America cannot engineer a good plane.)

When you hand the money over, it is theirs and they can spend it how they want.

True, when you buy from England, Germany, France, Russia, Brazil, India or Chinese, you hand them money so they can spend it the way they want, but I find it very hard to believe that we find Japanese culture and policies, in the long-term, to be more American than all of America, German, Europa, Asia, etc, combined.

In Capitalist world, money speaks, and the money is speaking Japanese right now.

America, the rich sugar daddy at cost to it’s lower/middle class people who have to have dependable cars to go to work. They are being forced to hand money to Japanese company due to the lack of dependable American cars.

I might sound like a protectionist here, but realistically speaking, all this hollering about Chinese stealing American jobs not only echos the same from more than two centuries ago in the 1800’s: 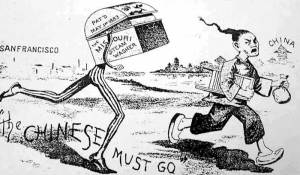 The Japanese doesn’t even bother stealing American’s Jobs, they just put a plant in America, make Americans work to build the cars and then take the money. I mean, Capitalist or not, as a sane person, that economical enslavement and thorough humiliation hurts more than a fucking Chinese kid working for a mouthful of food. Those fat Japanese (economic) imperialists pigs haven’t changed a bit in their ways since the last time they tried to take over the world through racial and ethnic cleansing of Asia. AND they are doing it from right under our eyes under the guise of being a better race: The advertised facts seem to say that only under Japanese management can cars be made with high quality in America. Are you going to take this crap sitting down?

Somewhat racist comments aside. I will bet you one thousand 2013 dollars that America will be richer and will have higher quality of life if we made our own cars and keep the money instead of giving it to a Japanese.

America will be richer and have better quality of life if all of China was to sink into the ocean, but the improvement will not be any where nearly as drastic as having one–just one–god damned car maker do a good job. Think of the morale boost it will give us. Who cares about the stinking iPad when I can drive, without polluting the environment, and safely and have the money go to a fellow American’s hand.

And the hidden agenda here, btw, if you are wondering about this rambling Chinese American, is to perpetuate the American way of life–life, liberty and the pursuit of happiness.

Why don’t we build a better car! Build a better car and show the world that we can do it. All of that negativity: corruption in government, large corporations, wall street… All those foreclosures, broken credit reports and all those mass killings… We will have lifted ourselves out of this freaking rut and resume our dreams of prosperity marching towards the great manifest destiny of the American way.

That would be so great!

Disclaimers: I work for a Japanese owned company. My statements here do not reflect my company’s policies. I suspect but do not know for a fact that Japan is building military robots using your hard-earned cash. I am not saying that America treat Chinese people the way they treat us in the 1800’s. I do not know the author of either books and have never read them.